My father never lived to see his dream come true of an all-Yiddish-speaking Canada.
-David Steinberg

I once wanted to become an atheist but I gave up. They have no holidays.
-Henny Youngman

Look at Jewish history. Unrelieved lamenting would be intolerable. So, for every ten Jews beating their breasts, God designated one to be crazy and amuse the breast beaters. By the time I was five I knew I was that one.
-Mel Brooks

The time is at hand when the wearing of a prayer shawl and skullcap will not bar a man from the White House, unless, of course, the man is Jewish.
-Jules Farber

The remarkable thing about my mother is that for thirty years she served us nothing but leftovers. The original meal has never been found.
-Calvin Trillin

Let me tell you the one thing I have against Moses. He took us forty years into the desert in order to bring us to the one place in the Middle East that has no oil!
-Golda Meir

Even a secret agent can't lie to a Jewish mother.
-Peter Malkin

My idea of an agreeable person is a person who agrees with me.
-Benjamin Disraeli

It's so simple to be wise. Just think of something stupid to say and then don't say it.
-Sam Levenson

Don't be humble; you are not that great.
-Golda Meir

I went on a diet, swore off drinking and heavy eating, and in fourteen days I had lost exactly two weeks.
-Joe E. Lewis

A spoken contract isn't worth the paper it's written on.
-Sam Goldwyn

Whoever called it necking was a poor judge of anatomy.
-Groucho Marx

A politician is a man who will double cross that bridge when he comes to it.
-Oscar Levant

Too bad that all the people who know how to run this country are busy driving taxis and cutting hair.
-George Burns

A committee is a group that keeps minutes and loses hours.
-Milton Berle

I don't want any yes-men around me. I want everybody to tell me the truth, even if it costs them their jobs.
-Sam Goldwyn

Television is a medium because it is neither rare nor well done.
-Ernie Kovacs

When I bore people at a party, they think it is their fault.
-Henry Kissinger

Engage in Torah and charity even with an ulterior motive, for that habit of right doing will lead also to right motivation.  - Talmud: Pesahim, 50b

Ever since Rabbi Akiba used the Passover seder to plan a revolutionary struggle against the Roman occupiers, the Jews have used the seder to begin concrete work on tikkun (healing and transformation).

To work out ends of righteousness and love are you called; not merely to enjoy or suffer.

“Pessimism is a luxury that a Jew can never allow himself.”  Golda Meir

The worship of God, though desirable as an end itself, can somehow never be in the right spirit, unless it impels one to the service of man.  - Rabbi Mordechai Kaplan

Concentrate on three things and you will not fall into the grip of sin. Know from where you came, where you are going, and before Whom you will have to give account and reckoning.- Pirkei Avot 3:1

We cannot learn from general principles: there may be exceptions.  - Johanan, Talmud: Kiddushin

A truly generous man is he that always gives, whether it be much or little, before he is asked.- Orchot Tsadiqim

A Jew can be Jewish with God, against God, but not without God.- Elie Wiesel

He who promotes his own honor at the expense of his neighbor's has no portion in the world to come.- Judah b. Hanina, Genesis Rabbah

Even if all the world tells you, "You are righteous," consider yourself a sinner.  - Rabbi Simlai

Prayer is meaningless unless it is subversive, unless it seeks to overthrow and to ruin the pyramids of callousness, hatred, opportunism and falsehood. The liturgical movement must become a revolutionary movement, seeking to overthrow the forces that continue to destroy the promise, the hope, the vision.- Abraham Joshua Heschel, "On Prayer"

Lose with truth and right rather than gain with falsehood and wrong.- Maimonides, "Tzavaah"

A man should never impose an overpowering fear upon his household.  - Babylonian Talmud, Gittin 6b

If you add to the truth, you subtract from it.- The Talmud

Quote of the Day 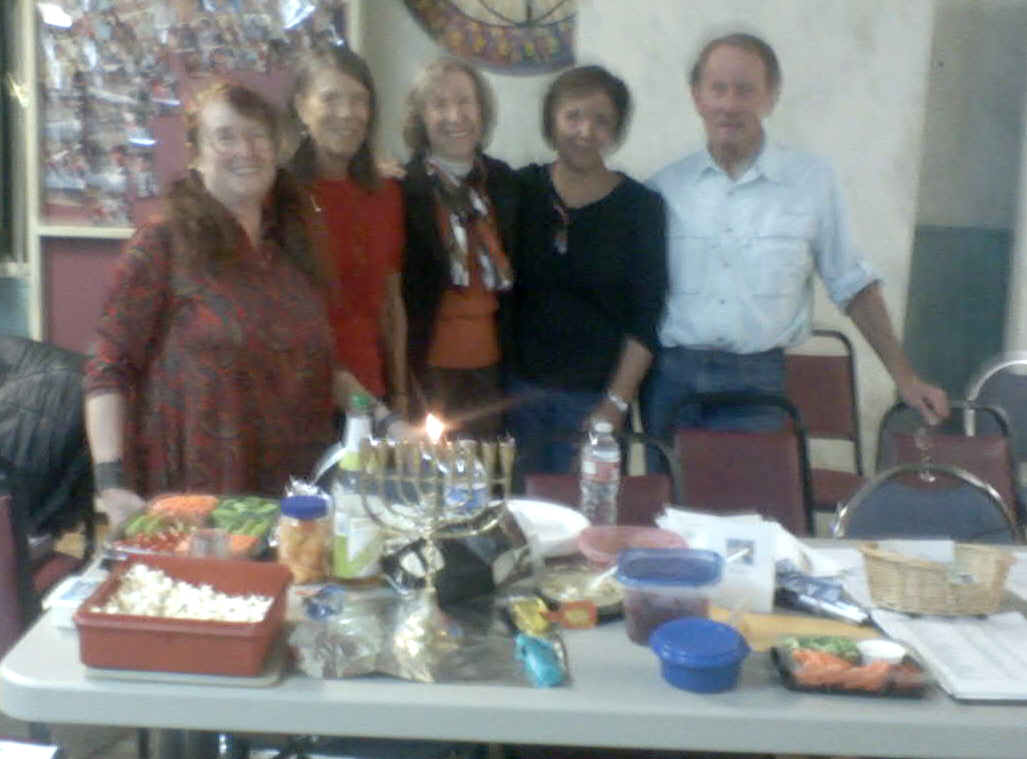 Seems this has been horribly neglected...  As of this day in March 2013, we are pleased to report that Rut's mom, Celia, has gone into remission from her tumors.  Definitely good news!

Jackie's daughter, Sally, went to Israel on the birthright  program earlier this year.  She promptly fell in love with the land and the people.  Now she has gone back for a five month work/ study program!  Mazal Tov and Yashar Koach!

However, the family is in the process of making plans to return to Columbia this coming year.  We will miss them... but in the meantime we celebrate with them their nachas and joy!

What a special surprise awaited us at our July classroom meeting!  The entire building other than our room was being used for a conference of the Society for Creative Anachronisms.  Not only did we have curious onlookers, but also they shared their potluck with ours.  Although we could not eat all, deviled eggs and cinnamon cookies and various vegetables were a welcome addition to our repast.  Most special was the lively discussion during lunch after kiddush.  The religious practices of Jews in the Iberian peninsula during the Golden Age of Islam were the primary topics closely followed by the history of the Talit.

How timely was such a discussion on Talit given that the evening was the start of Tisha B'Av and the following day of Tisha B'Av had discussions of Talit and Tefillin history after mincha!  Yad HaShem [Hand of HaShem]?  Perhaps....

Along with the distressing news we have described in Committee News, we also have a few good news items to report this Passover season:  David Miller's ecology/environmental protection film was selected for viewing at a film festival in Germany this week.  He is hopeful that this will help him get a distributor and good publicity.  The seating was sold out already last week!

update 4/23:  On Monday when we went for the classes at the Prescott Public Library, David updated us as follows:  500 attended the showing.  Previews and similar can be found at:  http://groupofforty.com/lectures/video.html

Lana and JB are doing extremely well.  Despite the dire predictions of imminent death a year ago, Lana is continuing with her psychic prediction and harmony with nature work as well as visits with friends.  JB is hanging in there and enjoying every moment he can spend with Lana.

Adele has completed her level II Civil Air Patrol studies and received her technician rating for her Character Development Instructor post.  She will also be participating this week in an emergency situation simulation at the command post in Prescott Valley.

Nov. 12th:  Our fall Simcha Party was one of good food and lively conversation.  [I just wish there were not so many leftovers - or that people would be more willing to take leftovers home!]  We celebrated many events even though not all could come to join us:

Avi-Esther's set-up for a radio interview re: her duela work

Oct./Nov. is a season with many simchas:  Birthdays for Jerry, Pauline, Abby, Adele, and Lira as well as an anniversary and a travel to Israel award, etc.  Hence we are going to have a Simcha Party at Adele's on Nov. 12th at 2 pm.  All are welcome to attend and - if you want- to bring a favorite party food!

For those who want to stay late,  a Sabbath songfest and Havdalah will follow.  Patrick is working on arrangements for our Chanukah party next month [Dec.].

Oct. 30th.  MAZAL TOV to Adele.  Her daughter, Avi-Esther will be interviewed on the radio by Veronica Monet on Monday 7 Nov at 9PM Pacific Time.

Oct. 28th.  MAZAL TOV to Pat!  Pat reports that her granddaughter Sarah was awarded a place in the Mayonot Yisrael program this winter to travel to Israel!

Sept-Oct.  Jackie's father-in-law is visiting from South America for the season!

Aug-Sept.  Leah has an even better job at the zoo and is finally catching up on her old bills.   Becky got cleaned up and went for her new job in Utah which she loves...especially since it is near her husband's work.  May they soon find an apartment to live in together!

July- Aug.  Eve got the teaching position at the Miami Hillel.  What a whirlwind of activity to get the house put together for renting and moving with all the children cross-country!  Yet she succeeded and has started a marvelouly newly enriched life.  Baruch HaShem!!!

June:  Eve is getting job offers from the Miami area.  MAZAL TOV!  Now if only she can find affordable family housing ...

5/14 Mazal Tov to Karin over her being able to spend the weekend with her children and family.

In April we welcome Karin and Herb to our ranks!

4/12 Carol G. has a new baby grandson in California!

Leah got a real job [no longer volunteer] with the zoo where she can use her wildlife education and do what she loves.

Jerry G. is getting some orders for custom made molds.

Mike G. has gotten a job in Germany.  He and the family will be moving at the end of April/ beginning of May.

Eve has been going on many interviews across the country.  Let's hope one of them will come through for a teaching position in the fall.

Adele has received a scholarship to continue her Rabbinic Studies. It is only 60%, so she is looking for other ways to help cover the last 40%...